Wet weather conditions couldn’t keep Ryan Fisher (AUS) from storming to his first ever World Cup title in Ishigaki with a monster performance on the bike and run courses. The rising star capitalized on a breakaway with fellow countryman Dan Wilson on the bike before he attacked on the run to claim his first major ITU title.

“I’m absolutely stoked. I came here in 2011, it was my first ever World Cup, so to come back here two years later and win is pretty cool,” Fisher said. “Winning any race is good but to come here and win at a World Cup like this, and it’s my first one, so it’s a huge confidence booster and first real race of the season.”

Bryan Keane (IRL), who attempted to stay with Fisher on the bike breakaway until he crashed in the final laps, clocked the fourth fastest run split of the day to come from behind for silver. After going into the run in prime podium position, Dan Wilson (AUS) held strong for bronze.

The men’s competition got off to a congested start, with Wilson leading a 15-man group out of the water within 14 seconds of each other. Korea’s Jung Min Park and Min Ho Heo were right on his feet, followed by Fisher.

Early on the bike, the men split into three groups, with 12 leaders out front on the first lap. However, athletes dropped quickly, with the group dwindling down to 11 by the first lap and the chase group 30 seconds back.

Pre-race top contenders Fisher, Keane, Tony Dodds (NZL) and Yuichi Hosoda (JPN) led, making it a challenge for the chase group to bridge up. After a crash forced Dodds and Ju Seok Kim out of the race, Wilson, Keane and Fisher took advantage of the the situation and established a breakaway on the third lap, leaving Min Ho Heo and Hirokatsu Tayama (JPN) to ride solo. Meanwhile, the remaining men joined the 12-man chase group.

By the fifth lap, the leading trio increased their lead to 50 seconds before Fisher and Wilson again took advantage after Keane crashed, losing him valuable time. The Irishman was then left to ride on his own for the final laps, frantically working hard to bridge the gap to the Aussies, but still held nearly two minutes over the third group. By the time the Aussies hammered for the run course, they owned more than a minute lead.

“You crash in any race your lucky to get up thankfully, it was a silly crash, I’d been careful throughout the race and came down 3 laps to go so had the bones of 14km or so by myself, I was so far behind I just had to put my head down and keep chasing,” said Keane.

“The race is never over if you crash, just get up and keep racing you never know what’s going to happen when you get off.”

With his sights set on gold, Fisher stormed through the first 2.5km and never looked back. By the final lap, he extended his lead to over a minute for an easy victory in the end. He became the seventh Aussie to win the World Cup, doing so in a time of hour, 52 minutes and 46 seconds.

Behind Fisher, Keane labored to decrease the gap between himself and Wilson, pulling even with the Aussie with just two kilometers to go. In a last-ditch effort, Keane overtook Wilson in the final stretch to earn silver in 1:53:50. Wilson earned bronze in 1:54:02.

“I was pretty much paranoid for 9.8km to be honest I really couldn’t believe it till the end, I felt pretty good going out. I ran out with Dan obviously and just sat on him to see how his legs were and I felt strong.”

“Winning any race is good but to come here and win at a world like and it’s my first one so it’s a huge confidence booster and first real race of the season,” said Fisher.

It was third time lucky for the Irishman this year after crashing out in Auckland last weekend, then just missing the podium in Mooloolaba, finishing fourth.

“Yeah, second podium you’ve always got to be pleased with, it’s my second World Cup, fourth at Mooloolaba, sort of messed that one up and missed the podium there so it’s pretty sweet after a crash last week in Auckland to come back and get a second opportunity, crash again but still come second.”

After a tough two years of frustration and injury Dan Wilson made a welcome return to international racing.

“I’m real pleased with that performance, it’s been a long time between podiums at a World Cup level, I’ve had a bit of a rough two years with a few injuries, so it’s great to come back and for the first World Cup of the year I couldn’t be happier.”

“Me and ‘Fish’ (Ryan Fisher) came ready to swim, bike and run, there’s three legs out there and we wanted to establish a bit of dominance on the bike and that was the plan and we managed to use the conditions and toughness of the course to our advantage and really be aggressive out there.”

“I was just trying to keep Bryan off for as long as I could over that last lap it became clear that he was going to catch me so I gave myself a little rest just about 10secs before he caught me and the plane was to stay with and let him know the race wasn’t over the try and hang on for a sprint finish.”

“But he was running really strongly and he was just a bit too strong over that last kilometer, the elastic band broke but I’m really happy with third place.” 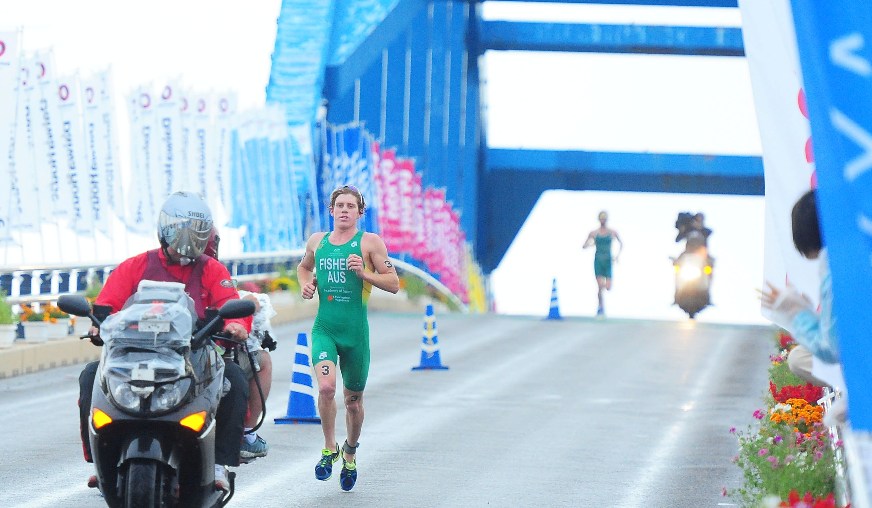