Triathlon World : Where are you living:

Katerina Alevizaki : I have been living in New York for the past 15 years now. Nevertheless, I was born and raised in Athens, Greece and consider myself Greek and i am lucky enough to be able to spend two months every summer in Greece.

Triathlon World : When did you start practicing sports?

Katerina Alevizaki : I think of myself as someone who has always had an interest in sports and working out in general. I started gymnastics at a young age and became passionate with it, so much so, that I remember using the school’s gym to work on my kips and flips any chance I had, and to such a degree that I would often be late for class. When I grew too tall for gymnastics, I started swimming, a sport that has been my life long favorite. Unfortunately, for a sport that is as technical as swimming is, i came too late into the game to become a competitive swimmer. However, growing older and with more responsibilities, it became increasingly difficult to have enough time to work out. Especially after having children, it took me awhile to find anew my work out ‘mojo’ and get back on track with my desired work out routine. It was hard at first, but i have now reached a point that working out has become an inherent and indispensable part of me. 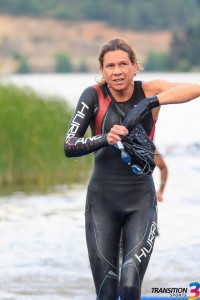 Triathlon World : How many hours do you devote every week in sports ?

Katerina Alevizaki : I like to say that I rarely can devote as much time as i would like to my work out schedule. I have three young children, and between taking care of them and helping out as a volunteer in their schools, i am not always left with enough personal time. In general, I try to work out at least one hour daily, though at times i can squeeze in a second work out during the same day. I like to do a variety of sports, of different intensities, everyday and every season. In the fall and winter i do kick boxing, Pilates, interval training and swimming. In the spring i start adding some running and indoor cycling while continuing to swim and kick box. In the summers i specifically train for triathlons.

TriathlonWorld : Are there any differences concerning the sports culture in Greece and the USA ?

Katerina Alevizaki : There are significant differences between the sports culture in Greece and the US. In the US in general, and more specifically in New York, people work out regularly and do so, in many cases, as a way of life. In New York people are really competitive and bring this spirit of competitiveness and striving for the best into their work out routine. As a result, there is constant demand for new ‘work-out’ products to keep the interest going, a fact that has both advantages and disadvantages. regardless, it is much easier to find a work out regimen that suits your needs, abilities, budget and time in New York than it is here. Moreover, the very fact that working out is an integral part of so many people’s lives, you rarely get the strange looks, snide remarks or outright intolerance that you sometimes have to deal with in Greece. In New York, i can go for a running race in the park, which is supported by tens of volunteers and is cheered by even more spectators, and feel comfortable to stop for a coffee in  my sweaty clothes on the way back home in a fancy coffee shop. I don’t think i would be that comfortable doing the same in Greece, even today, when there are many hopeful signs that the sports culture is changing.

i also find differences in the sports culture now as a parent. It appears that in the US children have way more opportunities and exposure to different sports and are encouraged to try a lot of things. When children do find their favorite they are quickly encouraged to devote themselves to their sport entirely.

Triathlon World : Are there any differences between the two countries concerning the quality of training venues ?

Katerina Alevizaki : I believe that in this regard the differences in the quality of training and facilities are significant. While training in Greece this past summer, there have been many occasions that i have promised to myself to never complain again about the quality of facilities in New York. Yes, often times the cost to participate in certain facilities in New York can be signifiant and/or prohibitive, but then again there are numerous other choices available that are within everyone’s budget. The swimming pools are clean and organized, and offer systematic training for Masters swimmers. There are hundreds of private gyms, that offer a variety of sports, different training styles and can, therefore, attract a wide spectrum of people and interests. The parks are well kept and safe, and not only runners and cyclists use them as a training ground but any person who feels like working out (Yes, i often do my kickboxing training in the park and have yet to hear belittling remarks). There are bike lanes, which are respected by the motorists, and recently the city of New York introduced a bike sharing program, that has been largely successful.

The more i train here, the more respect i accumulate for people who manage to train here on a regular basis, and deeply respect athletes and coaches who do so at a professional level. It seems that you need to have guts and temerity to withstand training successfully under such adversity. To provide an anecdote, I soon as i arrived this summer i visited a couple of gymnastics studios to find a place in which my oldest daughter could practice over the summer. I was shocked by both the condition of the facilities and by the unprofessionalism and rudeness of the the staff/trainers. It is regrettable that the combination of horrid facilities and lack of athletic culture mean that young kids don’t have the opportunities and the exposure to sports form a young age. In the US, children have numerous opportunities to try their hand at different sports and find the one they like and are really talented in and pursue it further. 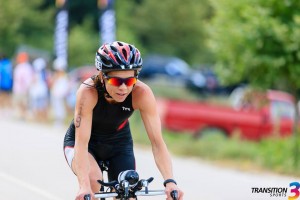 Triathlon World : When did you first learn about triathlon?

Katerina Alevizaki : I cannot really pinpoint the time that I first learned about triathlons, but I do remember answering the question “When are you going to run a marathon?” with the retort that i would much rather try doing a triathlon first. i find the alternation of sports in a triathlon particularly appealing, since i believe that athletes who train in multiple sports tend to be fitter and more well-rounded. Indeed, the very fact that to compete in triathlons you need to train well in three sports to me means that it is the ideal sport to pursue to achieve my goal of remaining fit and healthy.

Triathlon World :In which races you have already participated and what is your plan for the rest of the year?

Katerina Alevizaki : I have participated in several running races this year, as in New York there are running races of different distances almost on a weekly basis. I have competed in only one sprint triathlon this year, at Lake Doxa, but hope to compete in at least one more towards the end of August and perhaps aim for completing an Olympic distance in early September. I also would like to run the New York duathlon in November that signifies the end of the triathlon season. During the off season, I plan on working on my long distance running skills and complete succesfully and in good time, the New York half-marathon.

TriathlonWorld : Your fat percentage is extremely low. What is your secret?

Katerina Alevizaki : When I was younger, I was one of those people who could eat anything and as much as my heart desired and wouldn’t put on any weight. As I am getting older I am also getting wiser about my eating habits. I generally tend to like things that people consider healthy, like salads, nuts, different grains, and lean proteins without greasy sauces and I can resist any dessert with the exception of dark chocolate. However, i find that i cannot longer eat the huge quantities that i used to eat without suffering the consequences of a larger waist. So, when training hard, i try to eat more or less like a child. i will have 5-6 meals a day when i am feeling hungry, but stop eating when i am full. I also try to not eat late at night and then go to bed. 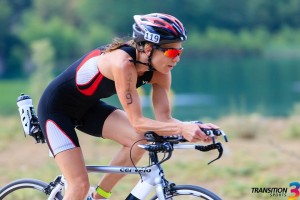 Triathlon World : How do you achieve to stay focused on your training schedule despite your family responsibilieties?

Katerina Alevizaki : It is perhaps the most challenging aspect of staying fit and/or training at a more focused manner. During the school year, I usually have no time to train during the weekends, so i have to train more during the week when the kids are in school. I often prefer to work out really early in the morning, before anyone wakes up. Not only does it helps me to jump start my day before anyone else, without having the guilt that practice takes time away from your family, it also helps keep me energized for the rest of the day. Needless to say, that most days i have to get to bed really early to get enough sleep. In general, there are times when family responsibilities make it hard to keep up with your routine, but it is then that you need to make the extra effort to make it happen.