Japanese women continue to dominate the Huatulco ITU Triathlon World Cup.  With 2-time defending champion Ai Ueda not back to try for a third straight title, her teammate Juri Ide kept the title in Japan by storming to her second career World Cup victory.

Following a solid swim, Ide rode safely in the lead group before burying the field on the 10km run to win by a comfortable margin, stopping the clock at 2 hours, 12 minutes and 52 seconds.

Italy’s Annamaria Mazzetti crossed the finish line 46 seconds after Ide for silver in the second straight World Cup this year after finishing runner-up in Tiszaujvaros in August.  Spain’s Marina Damlaimcourt broke through for her first career trip to the World Cup podium, securing the bronze.

The day began with a 2-lap 1.5km swim in the warm waters in Santa Cruz Bay.  After the opening 1km lap, American swimming powerhouse Sarah Haskins led the women as they ran back into water for the second 500m lap.  But uncharacteristically, Haskins fell off the pace slightly and was 12th into the first transition.

Instead it was Bermuda’s Flory Duffy that led the women into T2.  Not far behind were Claudia Rivas (MEX), Ide, Ainhoa Murua (ESP) and Aileen Morrison (IRL) as the women headed onto the tough 40km bike course.

With the challenging hill re-inserted back into the course this year, the women had their work cut out for them as they tackled the hill eight times.

A lead group of 14 women emerged and they worked well together to build their lead and extend it with every lap.  Taking turns at the front of the lead pack were strong riders like Line Jensen (DEN), Duffy, Haskins, Morrison and Mateja Simic (SLO).

As if climbing the grueling hill eight times wasn’t tough enough, the scorching heat and rising temperature were sapping the athletes of much-needed energy.

As they came off the bike, the chase group was down by more than two minutes.  Mazzetti was first out of T2, followed by Duffy, Damlaimcourt, Simic and Morrison.  Ide exited T2 in 10th place but it didn’t take long for the Japanese star to surge to the front.

She made her move on the second lap and opened up lead of 23 seconds on Mazzetti and Damlaimcourt while Morrison, Duffy, Haskins and Simic all began to fall off the pace.

By the bell lap, Ide appeared to have the win locked up with a sizeable 39-second lead in hand, leaving Mazzetti and Damlaimcourt to battle for silver.

Finishing strong, Ide broke the tape to claim her second career World Cup title, sweet redemption after a difficult season in which she has battled a lower leg injury since last year.

Mazzetti ran clear of Damlaimcourt in the final lap to comfortably take silver.

Claudia Rivas was the top Mexican on the day, finishing in 12th place.

In all, there were ten different nations represented in the top ten.  Portugal’s Vanessa Fernandes got off to a slow start with a weak opening swim. That put her down by more than three minutes early in the bike.  After riding solo for a few laps, she pulled the plug and withdrew from the race.

Chrabot comes from behind to win the race

American Matt Chrabot overcame a bike crash and came from behind on the run to ascend back to the top of the Huatulco World Cup podium today.  It was his second career World Cup title and second in Huatulco, after taking gold in 2009.

In a spectacular comeback in the final two laps of the run, Chrabot reeled in South African Richard Murray to claim the title with a time of 2 hours and 37 seconds.  Murray hung on for silver while Portugal’s Bruno Pais returned to the podium with bronze, his first World Cup medal since 2006.

“Even before the race, the challenge was just staying cool so even after I finished swim warm-up I sat in the water as long as I could,” said Chrabot.

With the killer Huatulco hill back in the course, the bike leg was primed for some attacks by powerful riders like in the lead group.  There were attempts but none seemed to stick.

Chrabot was in a mini break and just as they were about to swallowed back in by the chase, he went down, unable to avoid a crash in front of him.

“I had to stop to fix my brake pads but I managed to get back in the game,” said Chrabot.

Behind the lead pack, the chase group was slowly chipping away at the lead.  Aussie youngster Ryan Bailie and reigning African champion Murray (RSA) tried to bridge up to the leaders but eventually were brought back into the chase group.

The persistence paid off though, as Murray, Bailie, Ruedi Wild (SUI) and Pais helped the chase group catch the lead pack with two laps to go on the bike.  But the big pack didn’t stay together long as it again broke up by the time they hit the bell lap.

At the end of the tough 40km bike in which they had to climb the big hill eight times, Austrian Franz Hofer was the first into T2 with Italy’s Alessandro Fabian about four seconds behind him.  Rana was in third place, two-time Huatulco runner-up Wild in 8th place, McMahon 9th and Chrabot back in 15th place.

Hofer’s lead was short-lived though as Murray went out hard and rocketed to the front on the first lap.  He took a 14-second lead over Ivan Rana.  As Rana faded back and by the midway point of the run, Murray was leading by 30 seconds and looked like he might become just the second African triathlete to win a World Cup title.  But Chrabot was bearing down on him and gunning for his second World Cup title.

In the third of four laps, the American had cut Murray’s lead in half.  And on the final lap, Chrabot reeled him in and ran away for his second victory in Huatulco and third straight trip to the podium.

Murray held on for silver, his first career World Cup podium.  His previous best was 8th place in Tiszaujvaros a few months ago.

“It was an amazing race. Today I felt great, I wasn’t sure I was going to be on after a long season.” said Murray.  “I think on the second lap, I was dying but I just put my head down and I hoped and I knew he was going to catch me but I hung on and I’m truly pleased with my performance.”

Meanwhile Pais overtook Rana for third and stayed in front to seal the bronze, finishing 28 seconds behind Chrabot.

“On the bike, the uphill was good for me but before the race I was scared of the hill because it’s 20 per cent (grade),” said Pais.  “It’s the end of the season so I’m a little tired but in the run I did my best and it was good for me.”

Australian Bailie made quite an impression in his World Cup debut, just missing the podium in fourth place.  Rana finished up in fifth place.  The top Mexican on the day was Arturo Garza in 15th place. 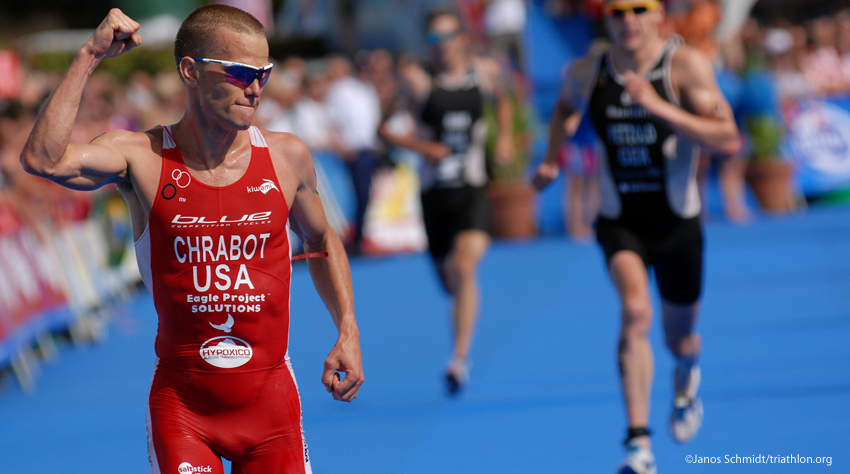