After a week of terrible weather, race day put up a perfect day for racing and fast times to boot. Although the morning was fresh, the ocean was calm unlike the previous days where there were people surfing out there.

Reigning Champion, James Hodge, Matty White, Tim Reed, local favourites Courtney Ogden, Guy Crawford andJohan Borg were in the field for the men’s and then late entrant and 2 time Olympian Brad Kahlefeldt meant the scene was set for a cracker.

In the women’s field, Kate Bevilaqua who was coming off an iron distance race six days earlier, Lisa Marangon,Liz Blatchford & Michelle Wu were the ones picked to contend for the win.

The swim was lead by defending Champion, James Hodge in the men’s who lead into T1 with a 30 sec lead over a chase pack of 4 which included Kahlefeldt, Sam Appleton and Fox with Crawford just trailing that group. The main group was a further 45 sec back, this meant a lot of hard chasing on the bike early to get back into contention or even chase Hodge down.

In the women’s swim, Liz Blatchford lead out of the water with Marangon & Andrea Oracki a further 30 sec back. Bevilaqua and Michelle Wu were a further 90 sec back and looked like a tough ask to get back into contention.

Hodge opened up his lead on the bike and averaging a touch under 43kph for the ride, he was always going to open up his swim advantage. Talking to him post race James admitted that he was going to the bike record and only missed out by 35sec.

Tim Reed made contact with the front chase group and knew that he needed to put some time into Kahlefeldt if he was to have any chance on the run leg. This was as interesting comment as Reed’s strongest leg is his run. To know that you need time up your sleeve heading onto the run shows the respect that the guys had for Kahlefeldt’s run leg.

With Hodge hitting T2 with a 3min advantage over first chase pack of Reed, Kahlefeldt, Appleton & Fox, it looked like the winner was going to come from one of these five. It was going to take a monster run from anyone outside this to be in contention.

In the women’s race Marangon didn’t take long to catch Blatchford and as they were getting into a real head to head war, Marangon suffered a controversial penalty as they were passing some of the tail end male pro’s. This would mean that after the first 45k, Blatchford could open up a 3min lead and with Bevilaqua having a great ride (and fastest of the pro’s) moving into second, the race looked like it was going to be all Blatchford’s way. Marangon recovered well on the second lap to be back in contention and hit T2 with Blatchford and Bevilaqua only a few seconds behind. This was to be a runner’s race.

How much did chasing impact on Marangon and how much was the iron distance race six days earlier going to affect Bevilaqua. It looked to be a race in three.

What no body realised was open Athlete Rachel Smith was motoring on the bike and posted the fastest female bike split of the day in 2hr 17min. After a 30min swim and this bike, was she going to be able to compete with a run time to challenge the big three?

When Kahlefeldt hit the run, with a deficit of 3 min, his mind was set in not only having a good crack at Hodge and co, but also the Run & Race Records. Tim Reed was going to be the only other person who was capable of holding his own against the Olympian and with these two heading out at 3:11min pace, Hodges lead didn’t take long to be cut in half. Hodge fought on like a defending champion should, however with the battle of the runners behind him and the effort he put into the bike leg, it was evident that he was going to be caught. The big question was… by how many?

Kahlefeldt opened up a good lead on Reed and without looking like fading; it was his race to lose. From behind Appleton & David Mainwaring started to move up through the field and were chasing Hodge down. With Reed safe in 2nd, the real battle was for the last position on the podium. Could Hodge hang on or was he going to be caught?

By running a 1hr 10min 35 sec off the bike, Brad Kahlefeldt secured the race win, run record and course record. Tim Reed’s 1hr 13min kept him in second and with Hodge hanging on from the fast finishing Appleton he managed third by 5sec. Both these boys collapsed after such a hard fought race. David Mainwaring finished 5th and with the 2nd fastest run time of the day, just need to work on his swim before he stands on the top step in future races.

In the women’s race, Blatchford was looking comfortable out in front and with Marangon’s legs starting to show the affects of a long chase on the second lap started to increase her lead. Bevilaqua was not showing any signs of the iron distance race only six days earlier and was racing out of her skin to over take Marangon and into second place.

Little known Anna Ross was making inroads in to the three pros in front, however with the time she gave up in the swim, was she going to able to grab a podium place?

Ross caught and over took Marangon who was fading and moved into 3rd place, however the gap was far to big to the two girls up the road.

Blatchford with her sub 1hr 24min run split took the win by 3min to a very gutsy performance by Bevilaqua. Ross rounded out the podium with the 2nd fastest run time for the women.

Liz Blatchford raced this weekend while in the middle of a big training block for Ironman Cairns where she is debuting on June 9. “I am happy how the race went considering where I am with my Ironman training. I only became aware ofRachael (Smith) half way through the run and I thought she was one of the pro girls. I kept an eye on her during the later stages of the run. Rachael will be great to race against in the future. She is a real talent!”

Blatchford looks like she is in great form for Cairns in four weeks. We look forward to seeing her race up there.

What no body knew was that Rachel Smith was running super strong and was posting times that were going to take the fastest overall time for the day. This was unless she blew up. This did not happen and with a 1hr 25min 38 sec run time, which was very competitive against the pros meant her overall time of 4hr 17min 54sec was just over 1min faster than Blatchford’s.

In an act of great sportsmanship, Blatchford acknowledged Smith’s achievement and said that she looked forward to racing her in the pro race. A well-spoken professional.

This was clearly the standout performance of the day, however many age groupers also had great days at Busso. Ex Commonwealth cyclist and Bike Monster Matt Illingworth had the fastest bike split of the day and broke the course record with a 2hr 4min 54 sec split (43.28 ave), Eric Watson showed that he is coming of age and with splits of 24.40, 2.23 and 1.16.30 he will be one to watch in the future.

Fastest Male open/age grouper was ex Olympian Rower Benjamin Cureton in 3hr 58min. Benjamin and Todd Skipworth have both shown in recent times that rowers can cross over and become very competitive Triathletes. With many fast times in the age group scene, no wonder the level at the professional level has risen.

Along with Smith’s outstanding performance, other females who featured throughout the day were Kate Gibby, local girl Kira Flanagan and Janine Willis. These three would not look out of sorts racing pro and are definitely ones to keep an eye out for in coming years.

The City of Busselton once again embraced this event and it is easy to see why the race sells out so fast and has such a great vibe to it. With a further 400 odd teams, the course was a buzz until late afternoon. If you are considering a 70.3 race to do in Australia, pencil in this race, as you will not be disappointed with the whole experience.

I competed for 2 separate teams to help out and did the swim in one…28.53 and the run in the other 1.21.30 and was amazed to see the support out there all day. It was a different feeling running a ½ Marathon in the afternoon and fueling throughout the day was different to preparing the previous night. I cannot recommend this event enough for those wanting the entire experience. 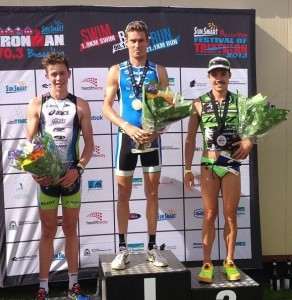