Weiss was the overall winner, completing the course in 2 hours, 27 minutes, including an astonishing bike split of 1:19:32. No other competitor finished with a bike time under 1:21:03.  It was a breakthrough win for the 30-year-old Weiss, who had finished second at the 2008 XTERRA Worlds, and then third in 2009 and 2010.

“It’s amazing,” said Weiss, who is from Vienna, Austria. “I still cannot believe it. A big dream came true, and it was a really tough course.”

Weiss was in the middle of the pack after the swim, but made his remarkable move to the front on the bike. By midway through the bike course, Weiss and South Africa’s Dan Hugo were riding next to each other in second place.

The only rider in front of them was the legendary seven-time Tour de France winner Lance Armstrong, who was competing in the XTERRA World Championship for the first time.

Weiss and Hugo actually talked about working together so that they could conserve energy in their pursuit of Armstrong.

“That was a critical moment for me, about three-quarters of the way through the bike and I was with Weiss, and we said let’s work together, but (Weiss) was one notch stronger and he kind of took off from me and he bridged to Armstrong,” said Hugo.

Shortly after breaking away from Hugo, Weiss closed in on Armstrong, and said it gave him an adrenaline rush that pushed him all the way to the finish line.

“It felt amazing,” Weiss said. “I had goose bumps. It’s something very special to catch Lance on a climb. It was an amazing feeling, and even motivated me more.”

Weiss used that motivation to do the unthinkable – he passed Armstrong on an uphill bike climb.

“I stayed a little bit behind him, I looked how he was doing, and I just gave it a shot and attacked and Lance couldn’t follow,” Weiss said. “It was cool.”

Armstrong later crashed toward the end of the bike course, and landed on his head. He said he needed a minute or two to gather his bearings before getting back on the bike.

“I hit it harder than I thought, because I stood there for a while taking inventory, trying to remember my name,” he said. “That probably took a little out of me … I’ve never hit my head that hard before.”

Hugo also crashed late in the bike course, but managed to recover with only one other competitor passing him (Conrad Stoltz). However, Hugo rebounded with a strong run, and passed Stoltz and Armstrong early in the run course.

“I caught Armstrong pretty early (in the run) and knew I was in second,” Hugo said. “But I could never make it up on Weiss. He was a little too far in front.  Looking back, that crash really hurt my chances, but that’s part of it. I would have loved it to be different, but it wasn’t meant to be.”

Hugo (pictured in white) finished second with a time of 2:27:33 – 33 seconds behind Weiss. Former three-time XTERRA world champion Eneko Llanos of Spain was third in 2:28:26, followed by Josiah Middaugh of Colorado in 2:29:14. Spain’s Ivan Rana, a three-time Olympian who was making his XTERRA debut, placed an impressive fifth with a time of 2:29:31.

“I caught some guys on the bike and thought I could reel some people in on the run climbs or downhills, but I really didn’t have anything left in the tank,” Middaugh said. “Even at the end of the run, coming to the finish here, (Ivan) Rana was right there and I had to do everything I could to hold him off.”

Perhaps affected by his bike crash, Armstrong (pictured in grey) faded during the run and finished in 23rd place overall with a time of 2:36:59.

“I made some mistakes,” Armstrong said. “I think the combo of swimming – I went out too hard on the swim, got a little excited and over-cooked it. It took me four to six miles to get comfortable on the bike and at that point, I was able to get in a rhythm and ride fast, but then the crash is the way it ended. If I had to do it over, I probably would have backed off on the swim and hoped for a more balanced bike ride, and of course, take the crash out. Like all these things, hindsight is 20/20.”

Still, Armstrong’s presence created a huge buzz for the 2011 XTERRA World Championship, and thousands of fans lined the course to catch a glimpse. He said he would like to take another shot at the XTERRA Worlds in 2012, but with a little more training time.

“Yeah, I don’t see why not,” he said when asked about a return to Maui next year. “But I think I would need to try some other events throughout the year. It seems to me the more you practice the little things like the strategy of the event, the transition from swim to bike, and transition from bike to run, the easier they become.”

South Africa’s Conrad Stoltz, who won his record fourth XTERRA World Championship in 2010, withdrew from the race early during the run course. He said he was experiencing breathing problems almost from the start of the race.

“I came into this race with some really strong training sessions, and I think this year I was in good form — better than last year at the same time,” Stoltz said. “But coming out of the swim, I couldn’t breathe properly and felt like I was going on one lung. I kept pushing and pushing and just couldn’t get going.”

Stoltz was still in third place after the bike, but said his breathing situation worsened as soon as the run started, so he stopped. 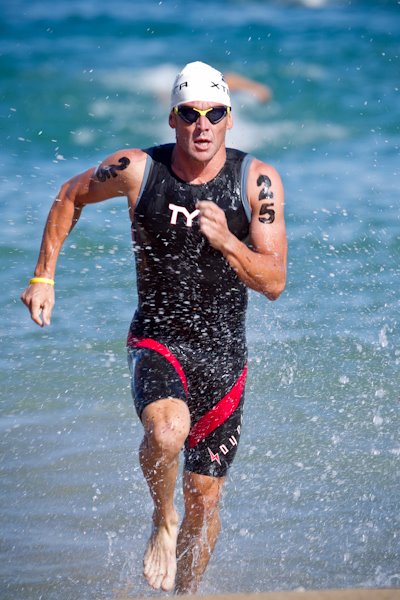