Great Britain’s Alistair Brownlee was already having a brilliant 2011 season, but the 23-year old stepped up to another incredible level in London when he used a gutsy bike breakaway to claim his 10th Dextro Energy Triathlon Series career race win in the 2012 Olympic Games preview.

In the only time that athletes can tackle the London Olympic course before next year, Brownlee gave the home crowd plenty of reason to stay on their feet in Hyde Park, just one day after Helen Jenkins claimed the women’s London race for Team GB. Even the pouring rain couldn’t stop those there smiling, as Brownlee won in 1 hour, 50 minutes and 9 seconds, beating silver medallist Alexander Brukhankov (RUS) by 25 seconds. Jonathan Brownlee put in the day’s fastest run split to claim bronze, but finished almost a full minute behind his older brother.

Alistair Brownlee’s win was even more incredible given that the breakaway he made with James Elvery (NZL) in the second lap of the bike, seemingly came from nowhere yet they managed to make it stick. While Brukankov took it upon himself to bridge it solo in the third lap, then Ivan Rana (ESP) in the fourth, that small group kept pushing the pace until they had more than a full minute on the rest of the field coming out of T2.

From there, Alistair Brownlee was unbeatable, hammering out a 10km run split of 29 minutes, 50 seconds that included high-fiving fans lined on the home straight and then a walk over the finish line.

“It was great, I couldn’t have asked for more,” Brownlee said. “I think it stayed at 10 or 15 seconds for a couple of laps and then it just went 30, 45, 60, I couldn’t quite believe it to be honest. I knew that we were in danger of being attacked on the bike and I think to be honest me being away served its purpose better than anything.”

Despite the fact that Brownlee had the title wrapped up early on, the race behind him was still a thrilling one as the battle for the final podium place started to emerge on the run. From a pack that included reigning World Champion Javier Gomez, Hamburg winner Brad Kahlefeldt, David Hauss, Laurent Vidal, Sven Riederer , Jan Frodeno and Steffen Justus, Gomez and Jonathan Brownlee pulled away on the third lap. It didn’t take long for Brownlee to drop Gomez and run onto his third Dextro Energy Triathlon ITU World Championship Series podium this year.

“It was a real strange race today, it was something completely different, Alistair going off on the road like that, it hardly ever happens,” Jonathan Brownlee said. “Alistair is already there and then that gap just went out to a minute and I thought ‘ok, I want to come third,’ and obviously Alistair and Brukhankov are there, two great runners, if you are standing in the pack together I’m probably 20 seconds into Brukhankov but when it got to a minute I thought I want to come third then, there is one spot left.

“So I took off on the run and it’s me and Javier and we were attacking each other constantly and after the third lap I was knackered I could have quite happily finished then, and then the gap went on for five seconds and I thought, come on come on Javier, please, please give up just let me have this one, then it was six or five seconds and I didn’t know I had got it until a couple of minutes to go and I thought, it’s over, but it was a real hard race. I gave it everything.”

The battle for top 10 finishes was equally fierce though, with national team Olympic spots at stake, Justus (GER), Hauss (FRA) and Vidal (FRA) all booked their respective London tickets with a finish inside the top seven finish.

But the qualification battle still wasn’t quite finished, as Olympic champion Frodeno and German teammate Maik Petzold battled it out for the second German place on offer in London, after Justus snatched the first spot with his 5th place finish.  Frodeno finished in 11th, edging Petzold by five seconds in 12th, to join Justus as the second automatic qualification for Germany.

London definitely didn’t go as planned for some athletes though, Chris McCormack’s return to ITU racing had another setback, he pulled out of the race early on with a torn hamstring, and the weather claimed plenty more later in the race. Jarrod Shoemaker (USA) and Andreas Giglmayr (AUT) both pulled out after crashes on the rain-slicked road.  Triple Olympian Hunter Kemper (USA) also pulled out during the run.

Overall, Javier Gomez retained the No.1 ranking of the Dextro Energy Triathlon ITU World Championship Series with a total of 2660 points. Alistair Brownlee moved up into second place with 2490 points. Brukhankov is in third with 2403 points. Gomez said he was happy to retain his spot on the rankings leaderboard.

“It was a tough day because of the rain,” Gomez said. “I could avoid the crashes on the bike, when Alexander, and Alistair and Ivan made the breakaway I was a bit far behind, it was my fault, and they did a great job, they well deserved this podium and I was fighting with Jonny for two and a half laps but he was a little bit faster than me today, so fourth place is not too bad, it’s good to race on the Olympic course and it’s good to be number one.”

After the victory ceremony, ITU President Marisol Casado thanked Sarah Springman, President of the British Triathlon Federation and Andrew Robb, Chairman of TATA Steel, the event’s presenting sponsor, for their support in hosting this successful event. 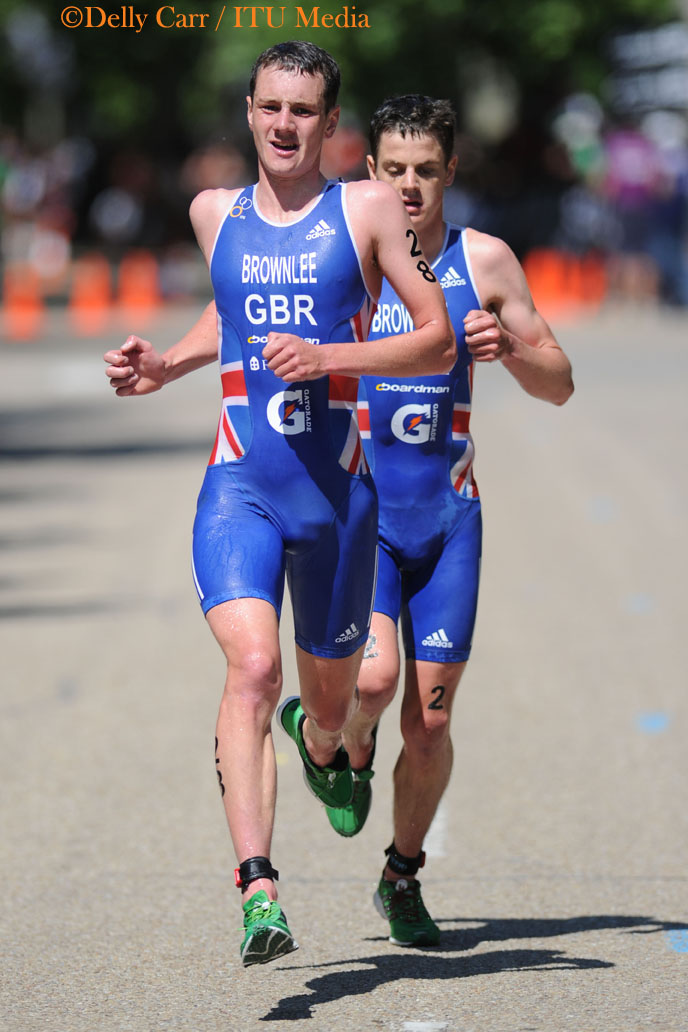