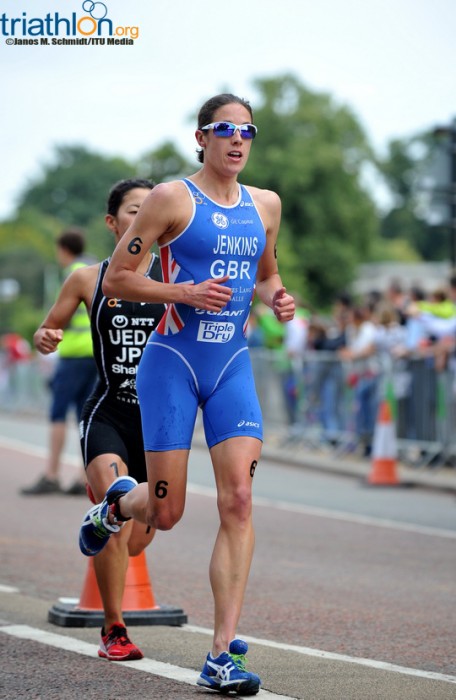 In a race that threw up a host of surprises, including new first-time medallists Gwen Jorgensen (USA) and Anja Dittmer (GER) making up the rest of the podium, Jenkins gave the home crowd exactly what it hoped for.

This weekend’s Dextro Energy Triathlon Series round is the first and last time that athletes can race the Olympic course before the London 2012 Games and despite having a slight cold, the 2008 World Champion powered away in the run to win by seven seconds. In the process, she booked her place on the GB team for next year’s Games, gained confidence on the course ahead of next year and broke free of her series bridesmaid tag. Before this race Jenkins had a total of six Dextro Energy Triathlon ITU World Championship Series medals, including two silvers in 2011, but not one gold. Until now.

“Oh, it hurt so much, normally when you win you are like ‘oh yeah, its easy’, but that hurt,” Jenkins said. “I didn’t feel great in the swim, and the bike was pretty easy but my legs didn’t feel great.

“I was just trying to follow my teammate Kerry Lang I was just trying to sit with her as she’s riding really well, so I was just like, follow Kerry and I’ll be safe and then I hit the run and I thought, I’ll just see how I can do, I’m not sure how I’ll do, and I was at the front so kept running, kept running and someone said, ‘you’ve got a gap,’ and I thought, I’d better keep pushing on. The last bit, someone said 20 seconds and I thought if I blow up I’m still going to lose, so I had to keep pushing right to the end.”

Jenkins was with the leaders throughout the whole race, as yet another series title this year came down to a all-out showdown in the run. Coming out of the swim a 34 woman lead group that included Jenkins, Australian’s Emma Moffatt and Emma Snowsill, Switzerland’s Nicola Spirig, the USA’s Laura Bennett, Sarah Groff and Sarah Haskins, New Zealand’s Andrea Hewitt and Canadian Paula Findlay established a lead of a minute on a chase pack of similar size in the first lap. But that chase, led by Barbara Riveros Diaz (CHI) and Kirsten Sweetland (CAN), cut that back over the seven laps and eventually bridged it, leaving about 50 athletes hit T2 together. From there, Jenkins set the pace and then went it alone for the final two laps as an intruiging battle for points and podium positions unfolded behind her.

In the end it was Jorgensen who pulled out the biggest surprise and the fastest run split of the day – 33minutes 43seconds – to claim silver and her spot on Team USA for 2012. It will be Jorgensen’s first Olympic Games and will complete an amazing transition, after she was plucked from a promising athletics career as part of a USA Triathlon talent identification programme. In London, she also was part of that bike chase pack that bridged the gap, coming from behind to the podium.

“No, I mean it’s just surreal, we have so many great people in the U.S it’s just an honour to be going,” Jorgensen said. “It really is surreal and give credit for USAT for coming to me, I mean I wouldn’t have even known about this without them, so it’s awesome.”

Then in a sprint for third, with Snowsill, Emma Jackson, Hewitt and Groff all in the mix, it was the three time Olympic veteran Dittmer who turned on her trademark dash to secure bronze. In doing so, Dittmer became the first triathlete to qualify for all four Olympics, meeting the German qualifying criteria of a top 12 finish.

“I’m really happy and speechless,” Dittmer said. “I think just with my experience, I just put it all together on the day that it really counted and yeah, I just wanted to go to my fourth Olympics and I pushed really really hard and I just focused on this race, and the last weeks went really really well, so I really believed I could make it and I just did it. It’s another dream come true.”

Jackson finished fourth and Snowsill fifth, continuing on their impressive form in Hamburg when they were two thirds of the all Aussie, all Emma podium. But given the Australian selection criteria for London depended on a win, the Australian team for London didn’t become any clearer. It did for Hewitt and Groff though, both met their national federation qualification criteria and their spots on the start line in London.

In the overall rankings, Barbara Riveros Diaz held onto her lead with her 12th placed finish. Findlay, the defending London champion who had won every other series race she’d competed in this year finished in 29th spot after a hip injury hampered her preparation. Findlay need a top eight finish to secure her spot in London, but will have plenty more chances to secure it before next year. Riveros Diaz has 2498 points, Hewitt moves into second place overall with 2493 points, while Findlay holds onto third with 2490 points. Jenkins is in fourth with 2346 points. 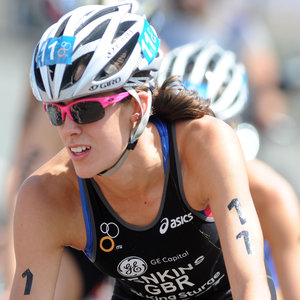